In recent years, both the metro Denver area and northern Colorado has tended to be the strongest labor markets and real estate markets in the state. This has been especially true in Larimer county where unemployment has been low and rent growth has been high. Greeley, which serves as a bedroom community to both the Denver area and the Ft. Collins-Loveland area has benefited as well. Below, I examine some recent regional statistics related to home prices and foreclosures. 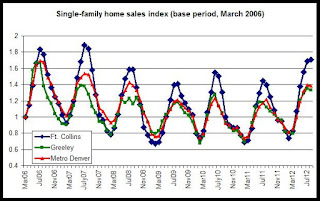 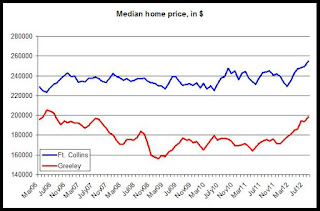 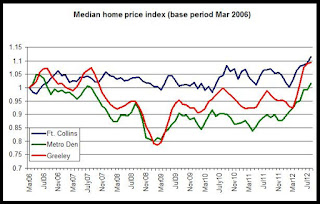 The third graph shows the trends in median home prices compared in the three regions. Both Ft. Collins and the Denver area are at all-time highs while the Greeley area remains below its 2006 peak. Ft. Collins home prices have outpaced both metro Denver and Greeley since 2006 and the Greeley area stagnated during 2009 and 2010, but has begun to show significant growth during 2012. Interestingly, Ft. Collins never showed the large decline in prices during 2008 that all other metro regions showed. The home price index is still down in Greeley from the May 2006 peak, but has nearly closed the gap. 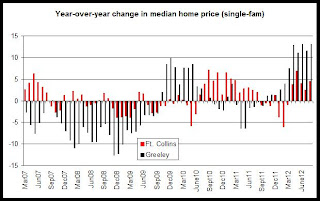 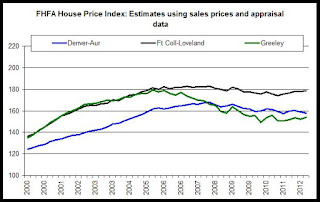 The Federal Housing and Finance Agency’s House Price Index further confirms that Ft. Collins prices are strong, although the Greeley prices in the FHFA index are weaker than those found in the CAR data. The fifth graph shows that home prices in Greeley and Ft. Collins were sharing a similar trend until 2006 when Greeley prices began to fall substantially and fell below both Ft. Collins and metro Denver prices. Ft. Collins prices, however, are nearly back up to peak levels in the FHFA data.
Even considering the more pessimistic FHFA data, the home price situation in Greeley appears to have stabilized after several years of significantly lowered prices. This is especially true when compared to Ft. Collins and metro Denver where prices have been more resilient. 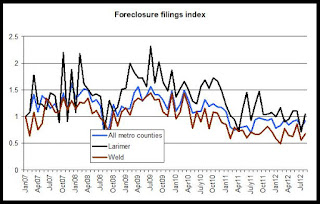 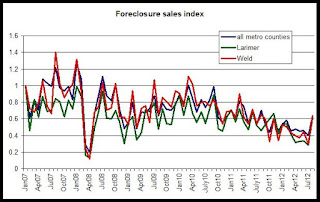